We’d like to set additional cookies to understand how you use JESIP.ORG.UK, remember your settings and improve government services..

The first edition of the CBRN(e) Joint Operating Principles provides guidance for the emergency services in how to plan, prepare and work together to respond to CBRN(e) incidents effectively.

What are the CBRN(e) Joint Operating Principles?

The UK Government recognises that a terrorist attack involving the use of Chemical, Biological, Radiological or Nuclear (CBRN) materials and potentially also involving explosives (e), constitutes an ongoing threat to the UK.

Whilst unlikely, the impact of an incident involving CBRN(e) could be significant and would represent a major challenge for the emergency services. It requires a specialist emergency response capability.

The new CBRN(e) Joint Operating Principles were developed by representatives across the emergency services at the National CBRN Centre. The Principles form a core element of the Government’s new National CBRN(e) Operational Response Framework, developed to reflect up-to-date scientific evidence to provide a rapid, flexible and scalable response to a CBRN(e) incident.

Endorsed by Ministers in December 2014, the aim of the Framework is to save as many lives as possible, and consists of three main components:

To ensure JESIP principles are at the heart of the response, the CBRN(e) Joint Operational Principles provide detailed guidance of how agencies should work together to plan for and deliver these components.

How will it be used?

In 2014, the National CBRN Centre began a significant training programme for responding agencies on the Initial Operational Response. This programme continues as the Centre looks to further embed the programme across the emergency services.

A new Specialist Operational Response has also now been developed, a capability the Centre is rolling out across the UK responder community to ensure it can work together effectively to manage a CBRN incident.

Alongside the training programmes, the CBRN(e) Joint Operating Principles have been, and continue to be, validated through testing and exercising by the Centre and its partners. 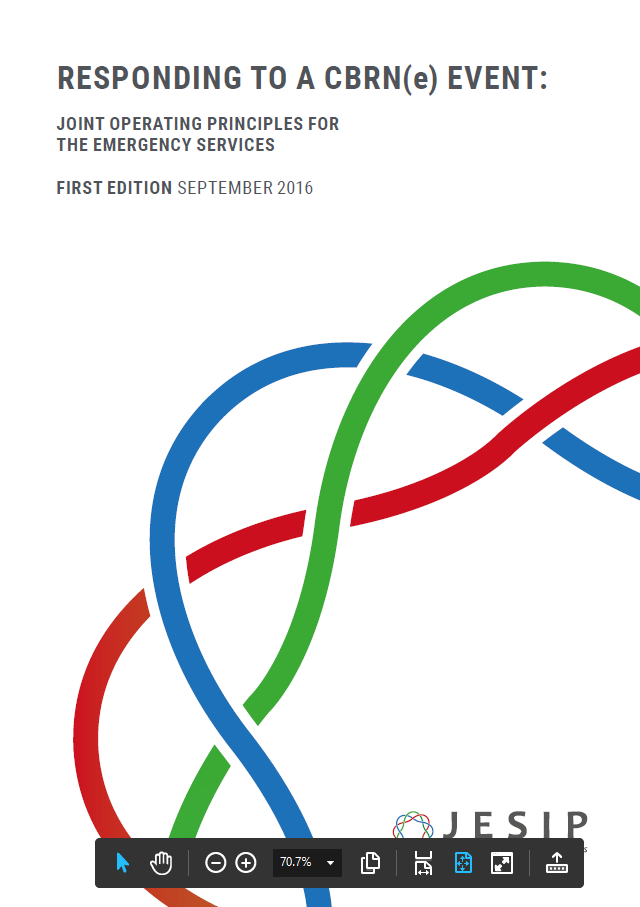 Access essential information including the JESIP Principles, Joint Decision Model, generate a M/ETHANE report and much more. Available for your desktop, Android and iOS devices.

Get the latest news from JESIP delivered straight to your inbox.