Emergency responders adopt levels of command when responding to incidents. The level does not convey seniority or rank but the level of command an individual has at the incident. The figure below shows the generic tiers of command and basic responsibilities. 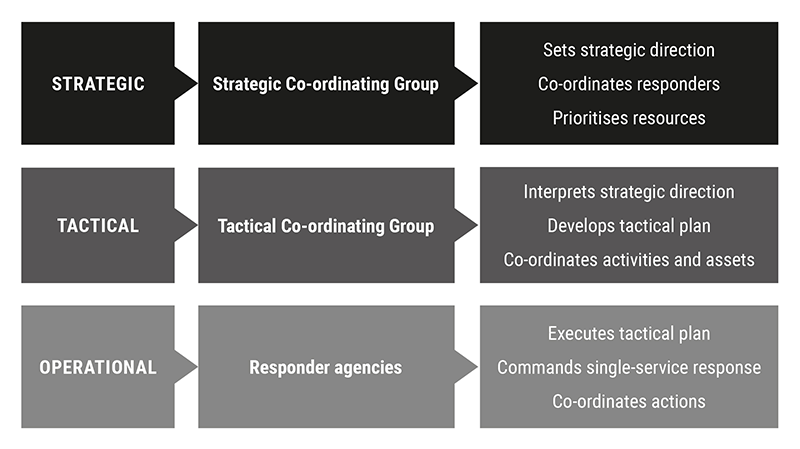 This document refers only to the generic tiers of command and not the specific functional activities of individual organisations.

There should be a clear and identifiable commander or representative who is responsible for co-ordinating the activity of their agency at each level of command.

It is important that all individuals who could be first on scene for their respective responder agency are able to declare a major incident, and that they understand the implications of declaring one. They must also be able convey incident information using the M/ETHANE model. Declaring a major incident begins the process of activating relevant plans.

Operational commanders will be working with colleagues from other responder agencies. This will most likely be at, or close to, the scene of the incident.

They will control and deploy the resources of their respective service within a functional or geographical area, and will implement the tactical plan as directed by the tactical commander.

Clear communications should be established and maintained so that individuals can work together in a co-ordinated way.

The roles and responsibilities of operational commanders can be found here .

In the initial stages of an incident, first responders are responsible for tactics. Once the scale and nature of the incident is known, emergency services will appoint officers to act as tactical commanders for their organisation. Other responder agencies may also appoint individuals to act as tactical commanders or co-ordinators on behalf of their organisations where relevant.

Communication and co-ordination between commanders is critical. Tactical commanders should be located at a mutually agreed location where they can maintain effective joint command of the operation. This includes effective joint working with other services, and other factors such as access to communications systems.  The fire and rescue service tactical commander will be located where they can maintain effective tactical command of the operation, invariably they will be in attendance at the scene.  Once the tactical co-ordinating group is formed, they will either attend in person or nominate a liaison officer to attend.

Where circumstances hinder co-location of commanders (of any level) then robust communications arrangements must be implemented, through the use of interoperability communications and where appropriate National Inter-agency Liaison Officers (NILO) to ensure a co-ordinated response and safe systems of work are maintained.

The roles and responsibilities of tactical commanders can be found here .

The strategic commander from each agency has overall authority on behalf of their agency. They are responsible for the resources of their own agency and for formulating their single agency strategy for the incident.

Each strategic commander may delegate implementation decisions to their respective tactical level commanders.

To minimise the consequences of the developing incident as far as is reasonably practicable, the structures and responsibilities detailed above must be activated and put into place as quickly as possible. It is acknowledged this is likely to take some time and therefore the first responders and commanders at a scene must identify and implement the initial tactics, whilst also communicating the need for support.

Personnel from one service who help another in this way should only be given tasks they are trained and equipped for, and they should not supplement the other service in a way that is potentially dangerous.

National inter-agency liaison officers (from the fire and rescue service or ambulance service) and tactical advisers are part of a network of specially trained officers who are qualified to provide commanders with advice on operational capabilities, limitations and capacity.

A core function of the multi-agency information cell (MAIC) is to produce the common operating picture that will inform and support the tactical and strategic co-ordinating groups and other responders.

Get the latest news from JESIP delivered straight to your inbox.